English With Style: A Guide for the Secondary Level 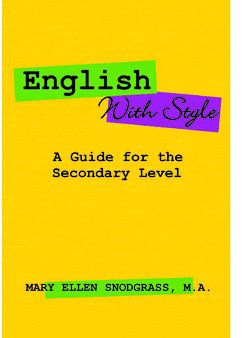 Both a textbook and a classroom guide, English with Style is packed with information on everything from grammar and usage to writing and literature. Students acquire "language sense" as they learn not only how to write, research, revise, and evaluate -- but to think logically as well.

An award-winning author and researcher, Mary Ellen Snodgrass is a Phi Beta Kappa graduate of the University of North Carolina at Greensboro with advanced degrees in English, Classics, Psychology, and gifted education.

A veteran of 20 years teaching high school English and Latin and three years as a columnist for the Charlotte Observer, she has produced Perma-Bound teacher's guides for 25 years.